The Haymon name has been known in southwest Louisiana for gospel singing.  Kevin’s dad, a minister for over 50 years, brought up his family singing.  They sang as a group that evolved as each of the kids got old enough to play an instrument or sing.

Early in life, Kevin loved music.  He spent hours at the family turntable playing vinyl records.  Eventually he followed in his father’s footsteps and learned how to play the piano.

At an early age Kevin began experimenting with song writing.  God has gifted him with lyrical craft and musical ability.  He served in the music department at the church his dad pastored, and later pastored by his brother, in Kinder, Louisiana, and began writing songs for groups, chorale, and choir.  Some of his early writing was recorded by the “original” Haymon family singers, with his dad, mother, sister, and brother in the 1980’s.  He had songs published by Chestnut Mound Music and Rex Nelon Music during this time.

Kevin married Tina Fontenot in 1990.  He continued writing, and he and Tina began singing together and working together in the church music program.  He and Tina have now raised their own singing group with their daughters, Olivia Kristen, Leandra Brooke, and Emma Grace.  They released their debut album with a collection of Kevin’s original songs in May of 2015. 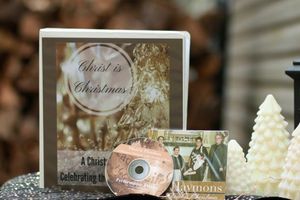 Christ is Christmas, A Christmas Celebration of the Lordship of Christ